Conditions of the Emergent Image in Contemporary Painterly Practice 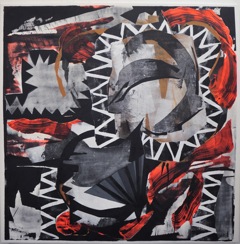 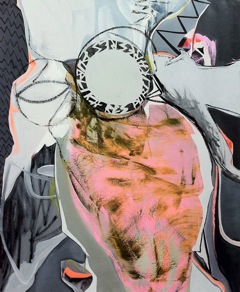 … Man, in fact, can be revealed only when bound to a previously existing historicity: he is never contemporaneous with that origin which is outlined through the time of things even as it eludes the gaze; when he tries to define himself as a living being, he can uncover his own beginning only against the background of a life which itself began long before him… It is always against the background of the already begun that man is able to reflect on what may serve for him as origin. (Foucault, 2002 pp.359-360)

This time warp, a belatedness and a certain pause that is inevitable in the process of unfolding, is interesting to observe from a point of reflection in painting. Foucault writes about a shadow between the switches of temporality that marks double space and a “blurred projection” where thought hatches in its inception. It is here that I find painting’s essential connection to motion that, unlike the automation of cinematography, responds to movement from socio-historical position as well as the self-presence, the body’s (painter’s body) presentness in time, which directly confronts its reflections through both its performality that is mapped by the process of painting and a recognition of its limitations, the pause, that is communicated in this double space of representation. The essence of the argument is related to the inception of thought that painting potentially can embody. More than any other medium, painting confronts the self with its reflections and shadows. This process, this confrontation is the subjectivation of the self that marks the presence of painting giving it its face and a singularity that is informed by both its interiority and exteriority as circumstances that frame its temporality. Subjectivation here is understood as a process of the realisation of the ‘technologies of the self’, enabled by a mobilisation of the agencies of identity, history and origin to act as free agents. In that, the boundaries of the ‘normative self’ are overturned in order to become an ‘active’ subject.

Hence the presence of painting that is not only relative to its perception or sensations but a more complex set of networks that are explicated through communication and a discourse between the painter and his/hers work. The role of the painter’s body in conditioning such events is an imperative. The process of subjectivation that is informed by the systems of knowledge as body technologies and management that, for Foucault, form the bases of bio- politics, including disciplinarian and confessional relationships new cultural and political being has cast in its role of a subject, are important to see in respect to painterly practice. A good example is found in Foucault’s Discipline and Punish, where the system of punishment is situated in a ‘political economy’ of the body that is no longer violent yet always concerned with the issue of body:

The body and its forces, their utility and their docility, their distribution and their submission… This political investment of the body is bound up, in accordance with complex reciprocal relations, with its economic use; it is largely a force of production that the body is invested with relations of power and domination; but on the other hand, its constitution as labour power is possible only if it is caught up in a system of subjection… the body becomes a useful force only it if is both a productive body and a subjected body. (Foucault, 1991, pp.25-26)

I wish to draw attention to the relation between the institutions of power and knowledge that Foucault finds imperative in the formulation of bio-politics. It is worth noting that such subjection of body to the relations of power-knowledge has inevitably changed the practice of painting, with the increased mechanization of painterly hand and gesture that has replaced the materiality and the sincerity of the ‘naked hand’ with the new mechanism of technology, of which the cinematic image is one example. The results of such a change were slicker, more readily available; dare I assume ‘painless’ and less organic displays of bodily excess. Such excess in painting is, never the less, both essential and formative of the process of subjectivation and offers resistance to the processes of reification and body commodification.

For Foucault, the institutionalisation of practice where “the individual has become an object of knowledge, both himself and to others, an object who tells the truth about himself in order to know himself and to be known” (Dreyfus, H.L and Rabinow, P., 1983, p.174) is counteracted by the production of meaning of truth that is accurately framed by Pamela M. Lee’s coinage futurity who adds:
“Comprised by an endless temporal switching, one always returns to past too late, just as one always projects into the future too early.” (Lee, 2004,p.51)

These circumstances are not causal; they inscribe and condition the functioning of body in relationship to knowledge production that is, as Lee points out, technologically and scientifically assured in its life production. Painting’s backlash to such conditions is conveyed, essentially, through its practice that has not, at this point in time, become institutionalised to the extent cinematographic automation has institutionalised the body, giving it a ready-made motion and the access to temporality at a roll of a camera, thus enabling easy consumption of its various representations. Such rendition of cinematic image concurs with Foucault’s management of bio-politics as the agency that has manipulated the access to actual time body locates itself in, creating a force of production that enacts the actual experience into the sequence of events that are formative of the narrative (a narrative also being the image of self that has already passed through a process of subjectivation), displaying the already objectified, knowledge ready representation of the self.

The painter’s body, on the contrary makes temporality, it is a type of unfolding painter has to create. Hence its subjectivation that does not produce a readily available access to knowledge/thought/representation but a process that manipulates itself and is being manipulated by a painter in its production of the actual painterly events. These are potentials within a structure of painting.