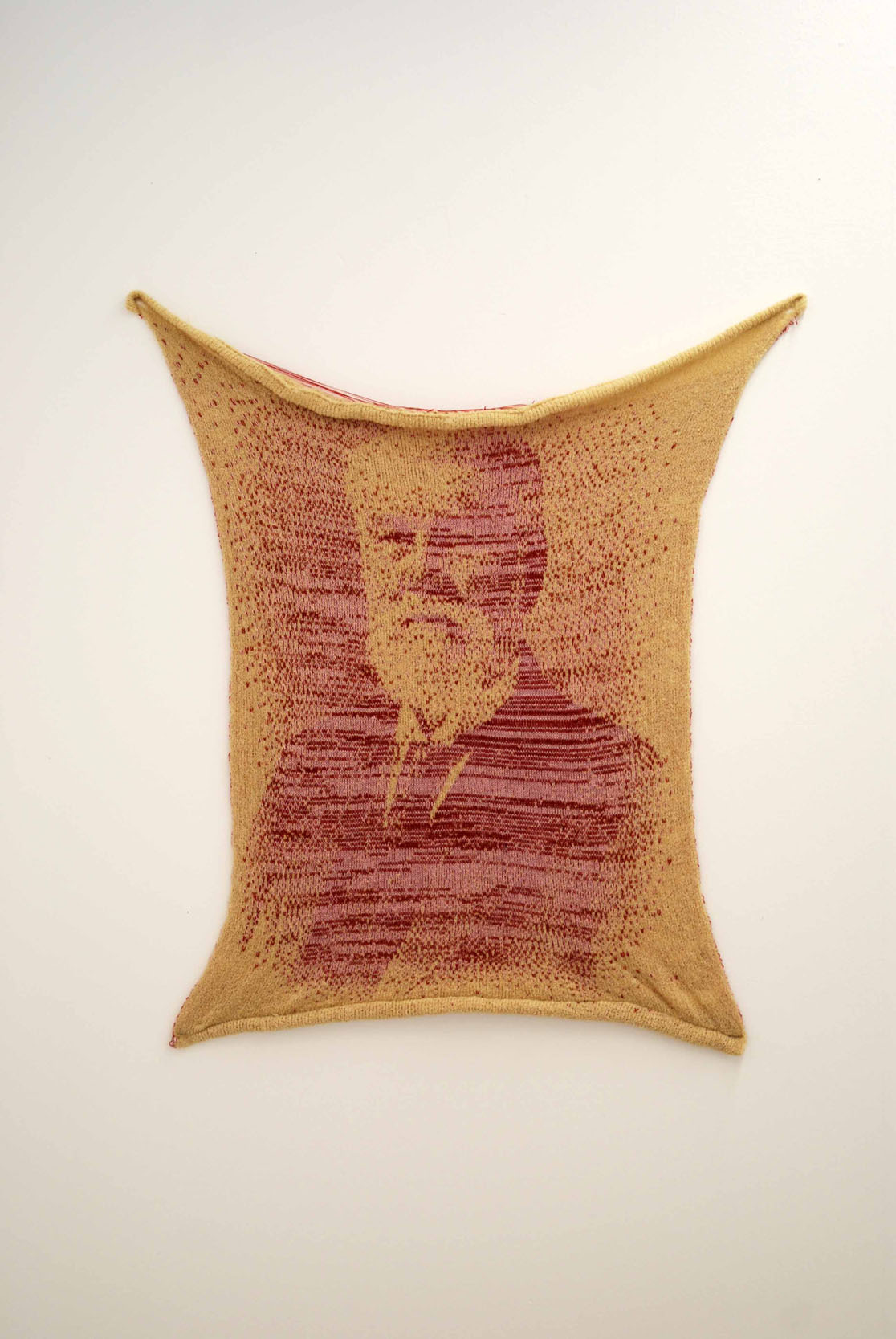 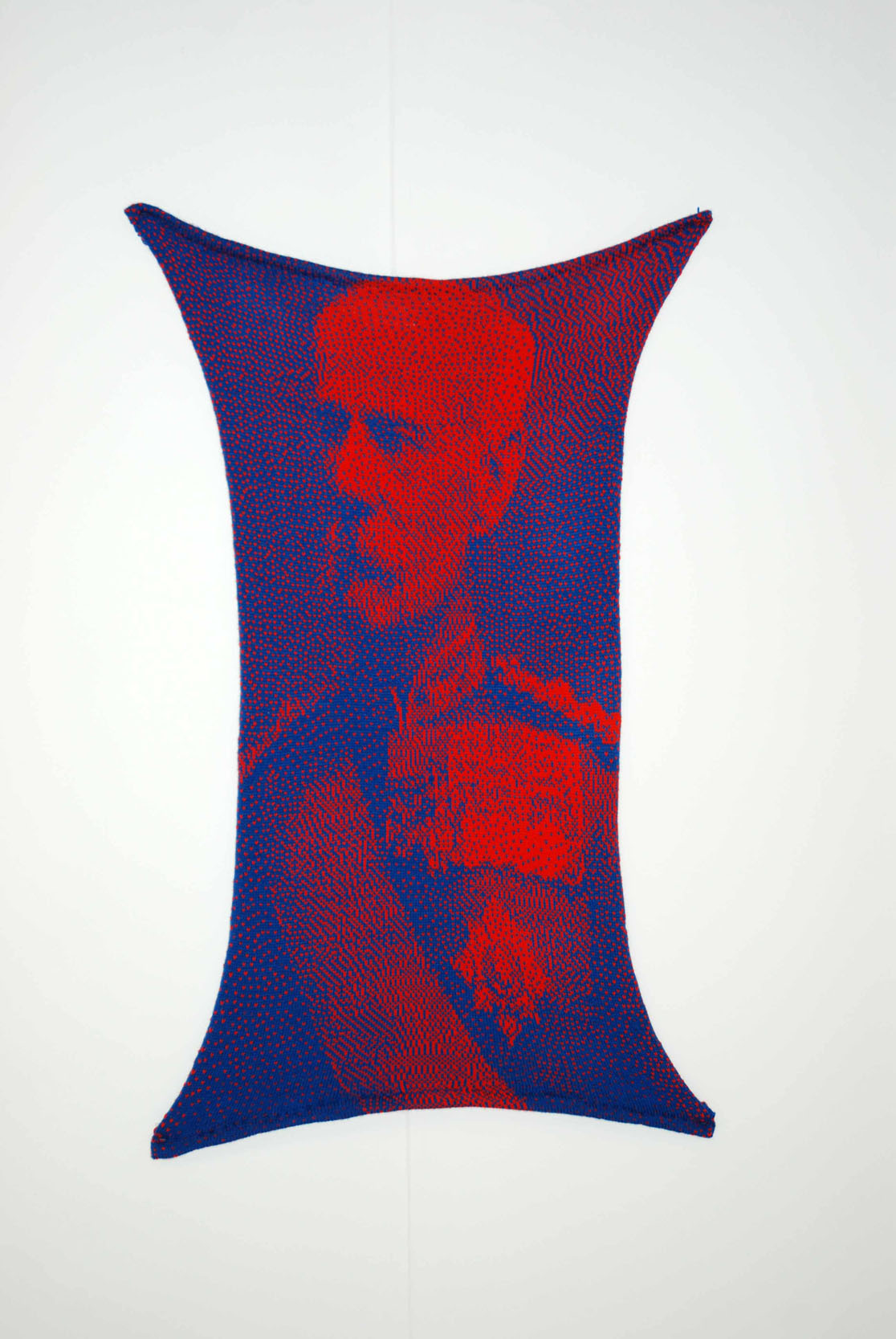 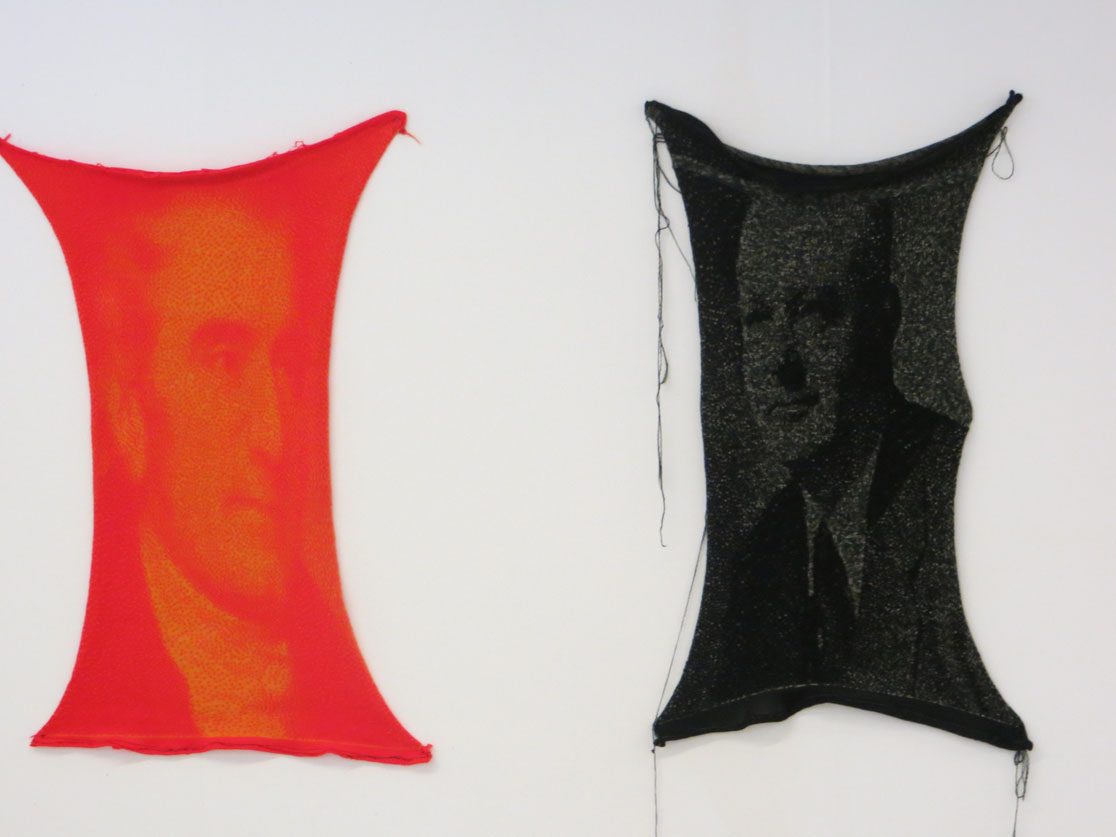 The nine men presented in the series of knitted portraits are inventors whose innovative work intended the good of mankind. This creative technology has been subsequently destructive, exploited in ways that caused loss of life or impacted negatively on the environment. I wanted to reflect on the 'hack' of the knitting machine, how in changing something from its original purpose triggers negative and positive effects. These portraits signify a discrete ambivalence between original intention and interested applications or 'use'. The legacy of the history of advanced technologies, is carried through machinic inventions. In the present, virtual information or data can be intercepted and re-purposed. The 'electroknit' installation interpolates data, superimposing the electronic and conceptual frameworks, to provide the freedom of technical information that can be liberated from its inherent political contradictions.

In order of appearance:

1. Richard Jordan Gatling invented the Gatling gun after he noticed the majority of dead from the American Civil War died of illness, rather than gunshots. In 1877, he wrote: “It occurred to me that if I could invent a machine – a gun – which could by its rapidity of fire, enable one man to do as much battle duty as a hundred, that it would, to a large extent supersede the necessity of large armies, and consequently, exposure to battle and disease would be greatly diminished.” The Gatling gun was used most successfully to expand European colonial empires by ruthlessly mowing down native tribesmen armed with primitive weapons.

2. Dr. Gerhard Schrader was a German chemist specializing in the discovery of new insecticides, hoping to make progress in the fight against hunger in the world. However, Dr. Schrader is best known for his accidental discovery of nerve agents such as sarin and tabun, and for this he is sometimes called the “father of the nerve agents”.

3. Frederick Roberts, 1st Earl Roberts set up “refugee camps” to provide refuge for civilian families who had been forced to abandon their homes for one or other reason related to the Boer War. However, when Lord Kitchener succeeded Roberts as commander-in-chief in South Africa in 1900, the British Army introduced new tactics in an attempt to break the guerrilla campaign and the influx of civilians grew dramatically as a result. Kitchener initiated plans to- “flush out guerrillas in a series of systematic drives, organized like a sporting shoot, with success defined in a weekly ‘bag’ of killed, captured and wounded, and to sweep the country bare of everything that could give sustenance to the guerrillas, including women and children.” Of the 28,000 Boer men captured as prisoners of war, 25,630 were sent overseas. The vast majority of Boers remaining in the local camps were women and children. Over 26,000 women and children were to perish in these concentration camps.

4. (LEFT) Joseph Wilbrand was a German chemist who discovered trinitrotoluene in 1863 for use as a yellow dye. It wasn’t until 1902 that the devastating power of TNT as it is better known was fully realized and it was adopted as an explosive in time for extensive use by both sides in World War I, World War II. It is still in military use today.

(RIGHT) Thomas Midgley discovered the CFC Freon as a safe refrigerant to replace the highly toxic refrigerants such as ammonia in common use. This resulted in extensive damage to the Ozone Layer. His other famous idea was to add tetraethyl lead to gasoline to prevent “knocking” thus causing worldwide health issues and deaths from lead poisoning. He is considered to be the man that – “had more impact on the atmosphere than any other single organism in Earth’s history.”