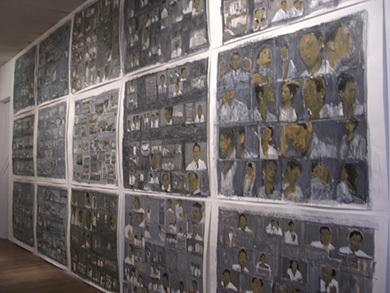 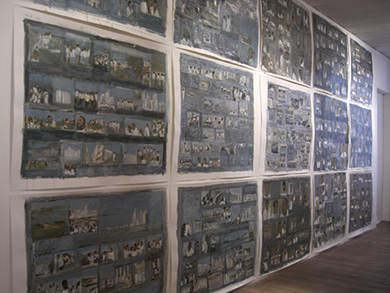 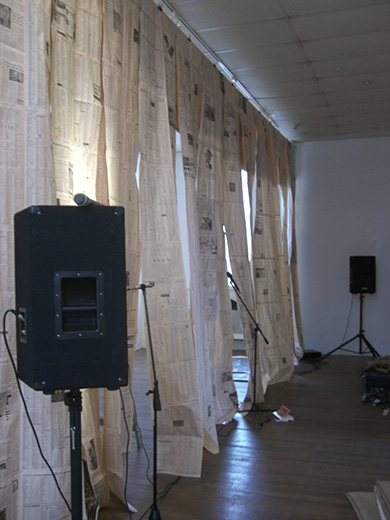 Press Release
Meno {2:1} Peter Lewis
Peter Lewis is an artist, curator and writer who has exhibited both within the UK and internationally since the 1970s. His works, which may be called 'configurations' (to borrow a term from the philosopher Alain Badiou) employ a wide variety of methods, forms and resources.
Their point of correspondence is to be found in Lewis' approach to his source materials, a process of drawing out or 'subtraction' that results in compositions that are never calculated or directly nameable. In the process of searching, working and engaging with the source material, the residue or remainder of this dialogical activity results in a complex voiding of established values, fixed classifications and neatly readymade meanings.

For his exhibition at T1+2 Gallery Lewis has taken Plato's short but rich and vivid dialogue 'Meno' as the starting point for a process of subtraction, in effect reading it as the script for a markedly new configuration. Lewis employs the Socratic 'enchelus' (a Greek expression signifying the idea of challenge or of testing) that motivates Plato's protagonists, who are conventionally regarded as seriously (but imprecisely) searching for knowledge through dialogic exchange, with, however, their intention being to end at an impasse.

This impasse might be dramatic: an individual subject's pre-conceptions may collapse, smashing to pieces the cause-and-effect chain of articulated meaning, laying bare, with equal measure, the void at the heart of things. Words just might, in this powerful and penetrating interruption of the unexamined 'reality', pierce right through the skin.

In 'Meno', the conversation opens up the question of the recollection of something that can or cannot be known, setting in motion a discussion of the nature of knowledge itself. In Meno {2:1} the dialogue is 'voiced' by subjective and disembodied entities, with Lewis drawing upon a paradox that is already located in the fact that Plato's own voice speaks through Socrates, and vice versa. The search itself, as played out by the protagonists in 'Meno', is always embarked upon as a risk, that of betraying what is invisible to it with its own visibility.

For Meno {2:1} the main wall of the gallery is the focus, yet simultaneously the 'blind' of the work. Hundreds of images from newspapers collected over a one-year period have been painted over, covering a monumental 30-foot wall, the newspapers having been re-assembled in the form of a storyboard, derived, in the first instance, from the words that are here both buried and retained. A curtain of felt cuts across the gallery space, preventing and delaying the immediate viewing of the wall. The concealment of the 'painting' by felt, a deliberate holding off of the viewer's direct encounter, suggests a kind of theatrical mediation, as well as a means of protecting the work from the outside world. However, this division of the gallery into two areas also restricts movement, stalls expectation, breaking the complacency inherent in art gallery conventions of display. It is neither an 'installation' of a work nor a 'multi-media' spectacle, but a counterpart, a dead zone casting shadow on what is to be seen as acceptable. In front of the makeshift 'stage', speakers and recording equipment provide a muted soundtrack made from several sources, notably a recording of a performance by the singer James Scott. Scott had 'appeared' in the final episode of David Lynch's televisual epic Twin Peaks, in the Black Lodge (a 'dead zone'), singing the haunting song 'Under the Sycamore Tree'. Scott's voice is affective here, forming a foil or oscillation between the live recordings also employed (those of actors representing the voices of Meno and Socrates, giving readings from 'Meno' and from Jacob Klein's published commentary on the text). The interference to, or interruption of Scott's singing rebounds with an equal force upon the viewer/listener caught up in the task of listening to the words of the dialogue. In the film The Dead Zone, [David Cronenberg, 1983] such a space is located within the subject's own capacity to release recollection whilst in seizure of a premonition.

Meno {2:1} is a work that disconnects the logic of dialogue in asking what might happen outside the predicate, by projecting its subject's excellence into the contingencies of the present time.