Filthy things at the dump 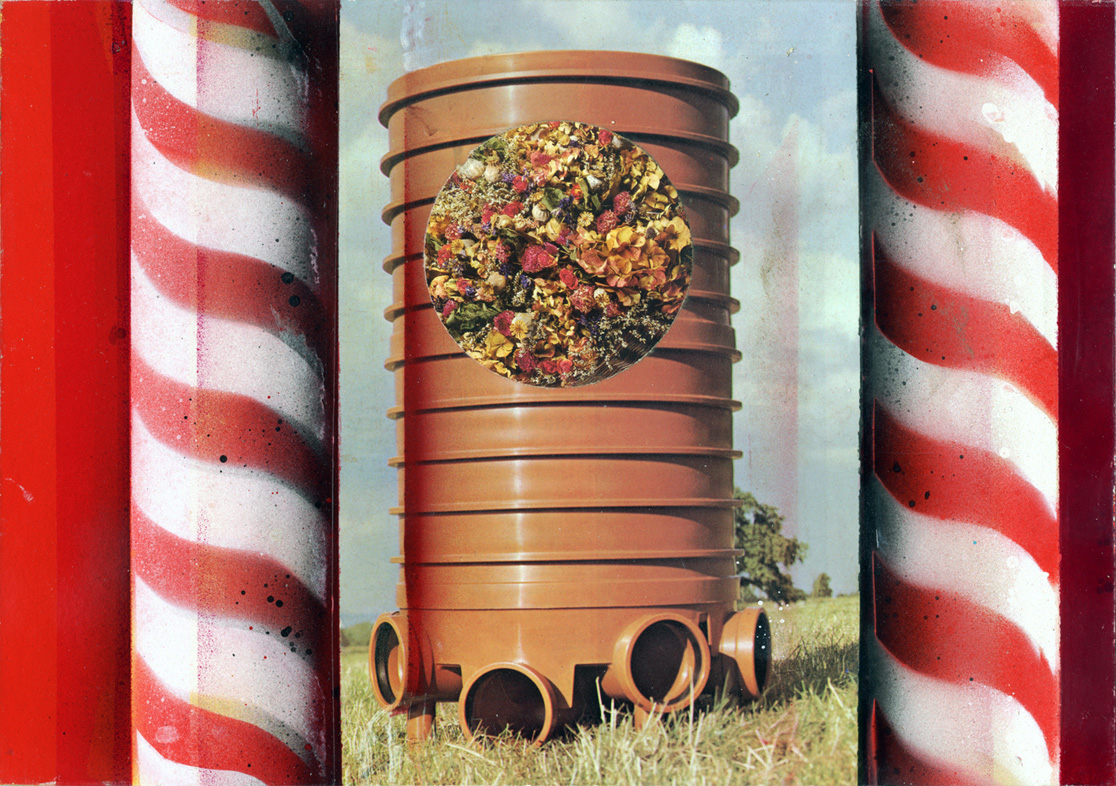 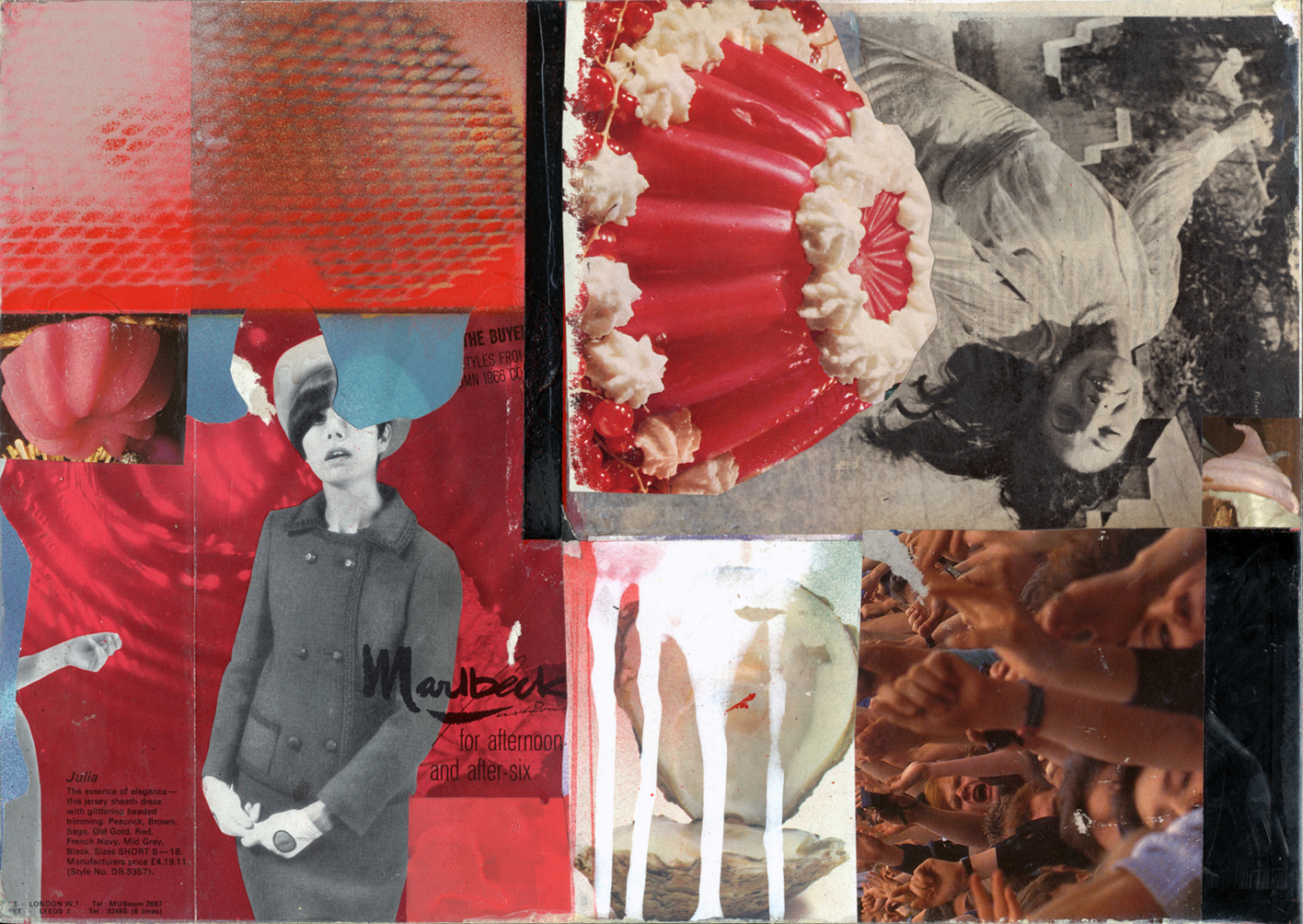 Filthy things at the dump
By Stephen Clarke and David Ferry

The rubbish dump is a fertile ground where once pristine objects are soiled in the febrile conglomeration. It is a banquet for the scavenging artist who can find rich pickings. Keith Arnatt found the sunsets of Turner at his local rubbish tip.[i] Photographing what he found he let the picture construct itself. The combination of warm evening light and decomposing foodstuffs coloured the scene. Fetid odours are expunged by the finish of the photographic print; crud is beneath its surface. Montages from David Ferry’s series ‘May Day in the Centre of England’ have the look of things that have been defiled on the rubbish dump.[ii] His photographic images are found in discarded books that he has bought cheaply at charity shops. Past their best with pages that are already age-damaged, Ferry further adds to their distress by sticking, spraying and cutting. The photographs are knitted into an organic whole.

‘May Day in the Centre of England’ is the artist’s re-scripting of the film ‘The Wicker Man’.[iii] Made up of thirty-two panels arranged in a grid format, similar to the storyboard of a film, the montage sequence moves from Day to Night. Instead of using stills from the film, Ferry took photographic images from found books to produce his parallel script. The cut images are spray-painted with stencils and unmixed colours straight from the tin. As Ferry says, this gives the montages the ‘Technicolor’ feel of a film or magazine.[iv] Coated with a varnish the montage is bonded into a vitreous tile. The montages in this project are an interpretation of the film rather than an illustrative transcription. Ferry refers to a ‘collage mentality’, which is not merely the physical making of an image but also the overlapping of references that construct our reading of that image.[v] Constructed from fragments, ‘The Wicker Man’ film is a complex collage in itself that provided Ferry with fertile material.

‘The Wicker Man’ follows the journey of the policeman Sergeant Howie who arrives at the remote Scottish village of Summerisle to investigate the disappearance of a young girl. He discovers that the inhabitants of Summerisle have reverted to pagan beliefs. A sexual tension builds up in the film narrative that will lead to the orgasmic finale. It is revealed that the devout Christian policeman is a virgin. Tempted by the landlord’s daughter (played by Britt Ekland) Howie struggles to maintain control. He is confronted with various acts of debauchery as the villagers prepare for the May Day festival. The film ends with the orgiastic sacrifice of Howie. Trapped inside a gigantic figure he is burnt alive and so reaches his own fiery orgasm.

Fertility is central to the film and is reinforced throughout the narrative. One key scene shows boys dancing around the totemic maypole. Each boy stands with a coloured ribbon in his hand which he makes shimmer as it rises to the top of the pole. An obvious reference to male ejaculation Ferry gives this prominence in his montages ‘May Day in the Centre of England’. On one montage (Day Panel 16) the striped pole flanks a large drainage pipe that stands erect in a field. The towering pipe is used to channel effluent. Celebration and its waste products do not seem to be far apart.

In Night Panel 29, at the close to Ferry’s re-scripting of the film, there is a photograph of a young woman dressed smartly in jacket and skirt. Taken from a fashion shot from the same period as the film, she waits expectantly for the start of the party. Images of food taken from recipe books surround her. Jelly and cream take centre place in the panel. The red jelly sticks out at a vertical angle like a quivering breast covered in globules of cream. Underneath this rude jelly is the photograph of an open oyster. This aphrodisiac seems to have achieved its function as it is covered by white paint that drips down post ejaculation. In the top right an image shows a woman swooning; to her left the stencilled outline of a penis points at her, while at the bottom of the panel a crowd are waving their arms in ecstasy.

After the party is over we are left with its aftermath. The vulgar red jelly stains the books and magazines strewn on the rubbish dump. Tins of paint spill over the dump soiling material. It is this physicality that Ferry’s recent montages evoke. Counter to the clean, pristine documents of digital montage Ferry’s pictures are made from the discarded things that he has found in the dumps of the charity shops. Like Arnatt, he gets his hands dirty as he rummages through rubbish. Slightly soiled with pages that stick together Ferry finds fornicating referents in this pregnant muck.

Stephen Clarke is an artist, writer, and lecturer based in the North West.

David Ferry RE is Professor of Printmaking and Book Arts at the Cardiff School of Art and Design.