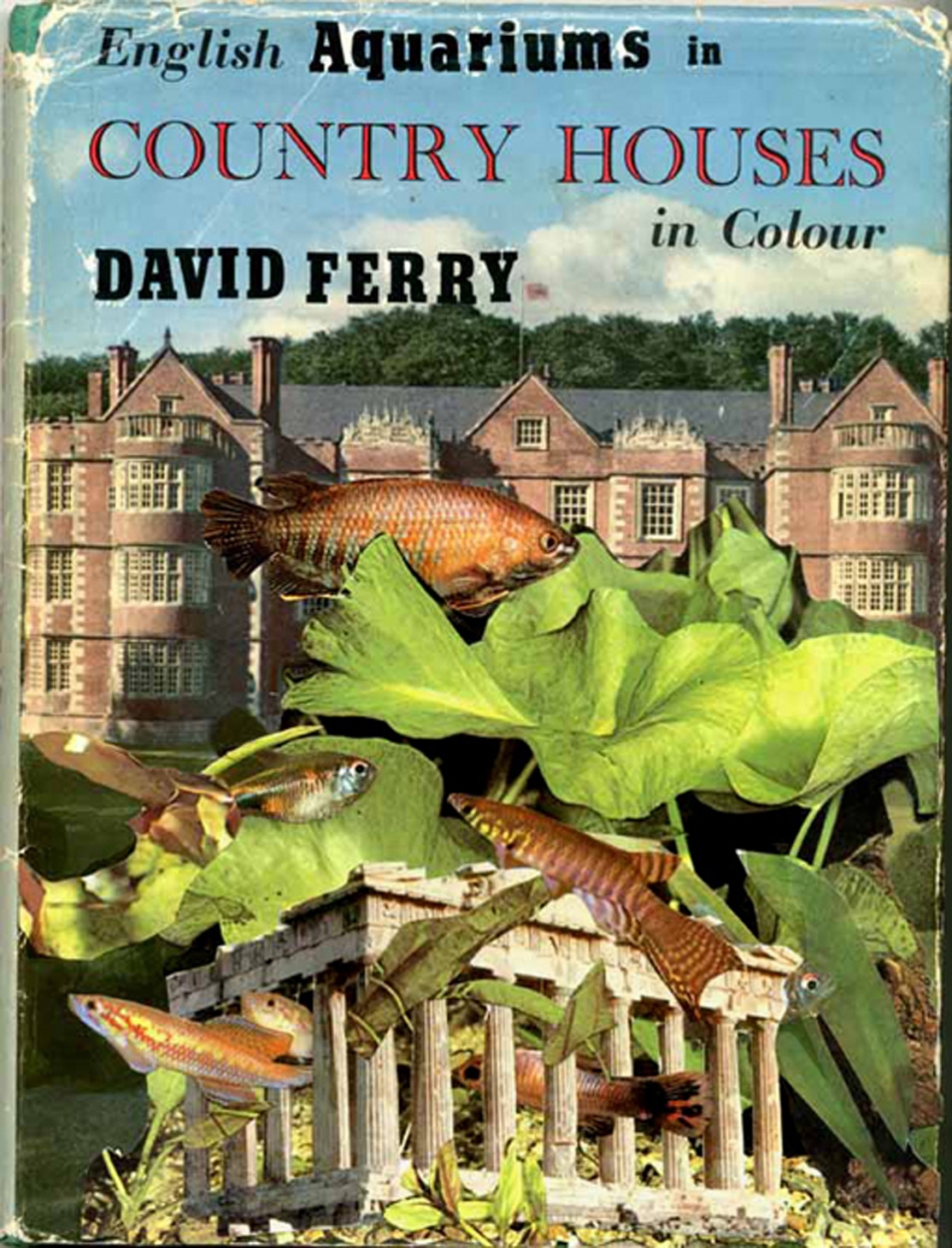 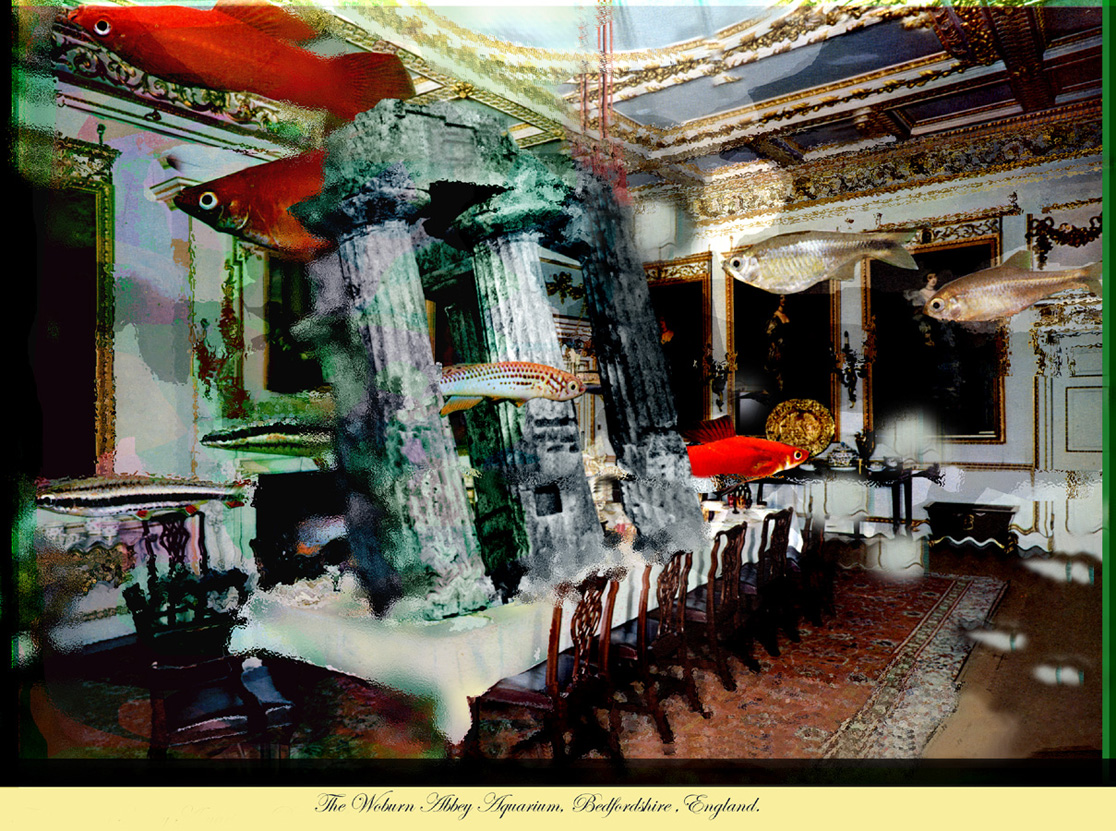 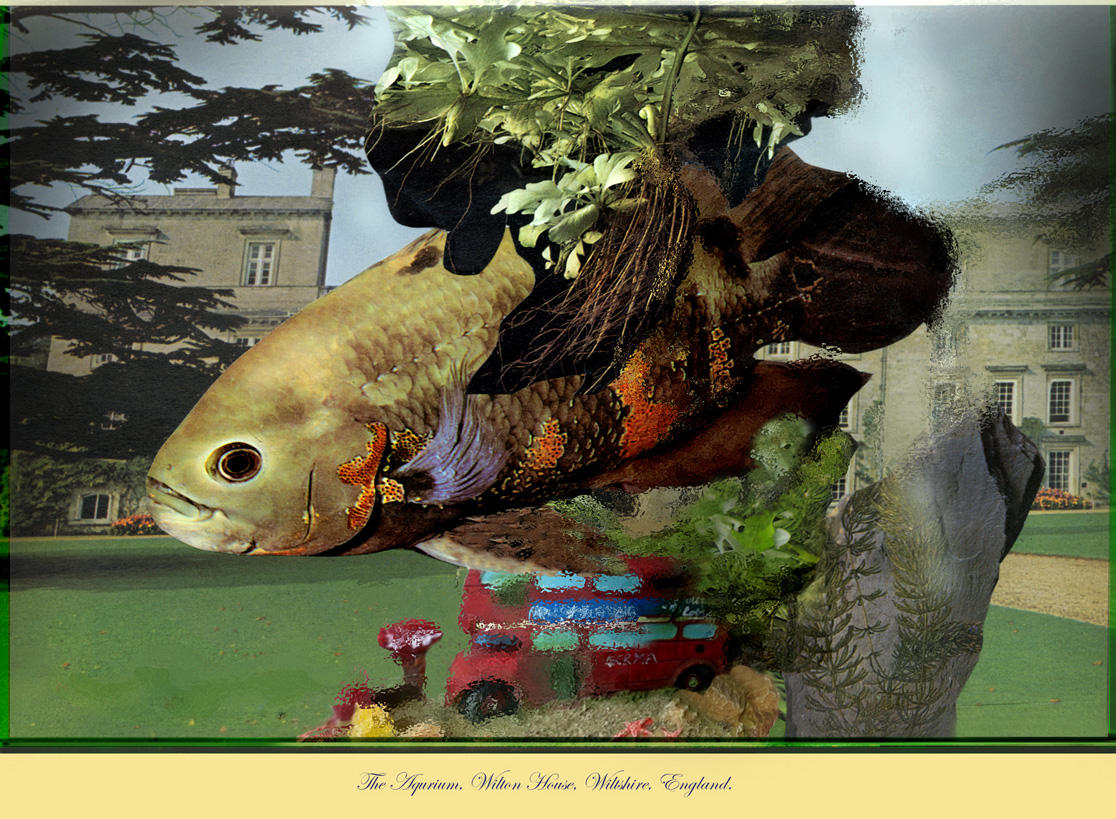 The English Country House is a redundant repository of culture and privilege but it remains with us as a part of national heritage. In David Ferry’s suite of prints The Stately Aquariums of England (2011) country houses are submerged like shipwrecks with fish swimming through their rooms[1]. Are there treasures to be salvaged? What is lost becomes the unknown; buried in obscurity the outmoded seems irretrievable.

Calke Abbey in Derbyshire was one of the most unknown country houses in England. The estate was bought by Sir Henry Harpur in 1622 and owned by successive Harpur baronets. With the death of Sir Vauncey Harpur Crewe in 1924, the house lay in terminal decay. Sir Vauncey had shunned attempts at maintenance of Calke Abbey, instead he concentrated on building up his enormous collection of stuffed birds, bird's eggs and insects. By the time of his death the taxidermy collection numbered several thousand cases. Calke Abbey remains partially untouched by its new owners the National Trust as an illustration of the English country house in decline with Sir Vauncey’s collection nesting within its rooms [2].

Retrieval of the lost and unknown as an artistic practice is at the core of Hal Foster’s essay: An Archival Impulse (2004) [3]. Discussing the work of Tacita Dean, Thomas Hirschhorn, and Sam Durant, Foster identified an archival tendency in contemporary art. From found archives these artists had sought to retrieve historical information that has been lost or displaced. Although most of this information was drawn from mass culture, some sources were obscure. The reference these artists made to these unknown facts is seen by Foster as “a gesture of alternative knowledge or countermemory”.[4]

Throughout the 1990s David Ferry had worked on a collection of artists books that came together in the touring exhibition: Aspects of Our National Heritage (1999).[5] Using cheap post-war tourist guidebooks to the British Isles bought from charity shops on the high street, Ferry worked with substrata of lost information. The books were filled with old photographs of a past age which Ferry defiled as he inserted images from another period, mostly the DIY magazines from 1960s and ‘70s. He disrupted the comforting scene of an outmoded historical narrative setting up an alternative knowledge, a ‘countermemory’.

In the same year as Ferry’s touring exhibition, the outmoded was the subject of Tacita Dean’s film Sound Mirrors (1999). The ‘mirrors’ are three massive concrete structures built at Dungeness in Kent between 1928 and 1930. Conceived as a warning system of air attack from the Continent they were rapidly replaced by the more precise instruments of radar. The mirrors now stand as relics to a previous technological mode. Dean has commented that: "The land around Dungeness always feels old to me: a feeling impossible to explain, other than it is just 'unmodern'... It just doesn't function in the now”.[6] Foster observes that Dean recovers archivally “arks of lost moments” in which the artwork functions as a portal between an “unfinished past and a reopened future”.[7]

What reopened future does the English Country House have? In 1982, Calke Abbey with all its contents was offered to the nation in settlement of tax. Following a protracted process that fed through The Times, The Guardian, Channel 4 and BBC Question Time, the estate was transferred to the National Trust in 1985. The National Trust sees Calke Abbey as an important contribution to the nation’s heritage, a ‘portal’ to a past. The portals to a past that Ferry uses are books from a more recent period that guide us through a golden age (or haze). The nostalgia from this age is cut into by trespassing fragments from other books on the shelf.

Quoting Thomas Hirschhorn, Foster identifies the will “to connect what cannot be connected” as a feature of archival art.[8] David Ferry has worked with photomontage throughout his oeuvre. It is this collision of material that is the subject of his works. Commenting upon The Stately Aquariums of England, he says: “I took a book on the English Country House and thought about the trappings of the wealthy and ‘landed arrogance’. Tropical fish on the other hand are perhaps now more housing estate and semi-detached. The juxtaposition is both hilarious and tragic”.[9] Ferry’s absurd images seem to connect what should not be connected, however, these images are not too far removed from Calke’s crumbling structure and its possession by stuffed birds.

An art student in London during the late 1970s David Ferry has been shaped by the political environment of the time. His series The Star Chamber (1986 - 87) dealt directly with aspects of power, combining contemporary imagery with historical ones.[10] Since the early 1990s his work has been less explicit but there is still the underlying questioning of the national identity and the British socio-political landscape. The Stately Aquariums of England mixes material from the heritage culture of the late twentieth century - that still holds sway in the twenty-first century - with the middle-class world of the hobbyist. A statement about taste and value seems to be being made. As part of the debate about the fate of Calke Abbey, Howard Colvin, the architectural historian, spoke of the objects of value at Calke, which amongst other things included Bronze-age swords and eighteenth century Chinese silk hangings.[11] Upper class good taste becomes a political weapon of defence against lower class intrusions.

The rare objects found in the country house are physical repositories of information retrievable by our bodily encounters with them. Foster points out that the processes an archival artist engages with might imply that the ideal medium of archival art is the mega-archive of the Internet. However, he makes the distinction between database art and archival art. The archives that these artists work with require physical manipulation. He describes the materials of the archival artist as recalcitrant and tactile; it is the stuff of archaeology with which the artist deals. Archaeology is a process of digging up the buried, unearthing what has been lost. The cheap books that Ferry finds in the high street charity shop require charity for their existence; they are unwanted, second hand and out of date. Ferry states that he can be brutal with these cheap books and that he likes the “re-re-cycling of it all”.[12]

The question of what is of value and what is not is at the heart of the archive. Instrumental in saving Calke Abbey was Marcus Binney, the president of SAVE, an organisation devoted to the salvation of Britain's architectural heritage. For Binney Calke was treasure to be preserved, whilst opposing this view Lord Vaizey, a then member of the parliamentary Heritage Group, asserted that Calke Abbey was filled with junk. At the close of his essay Foster refers to both entropy and archaeology. Calke is certainly an image of entropy as it sits in a constant state of collapse arrested by National Trust maintenance. The books that Ferry finds in charity shops also lie in this in-between state, no longer wanted but perhaps of value. They are examples of literature of their time, maybe full of junk in the present but to be treasured in the future.

In conclusion to his essay, Hal Foster argues that there has been “a shift away from a melancholic culture that views the historical as little more than the traumatic.”[13] In Ferry’s work the historical is hardly ever traumatic but instead is both nostalgic and comic. As with Calke Abbey, his work retrieves a lost history from dubious fragments and this is punctured by trespassers such as enormous tropical fish or, in Calke, a huge collection of stuffed birds. Noting that culture is in a stalled relativism since the high point of postmodernism, Foster asks the question: “why else connect so feverishly if things did not appear so frightfully disconnected in the first place?”[14] Archival artists not only draw upon archives but also produce them, retrieving the lost past in an attempt to define the present. Rather than provide us with a history of British heritage David Ferry’s ongoing archive of altered books provide us with a parallel hysterical British heritage. As an archival artist he pokes through the stable representations of a lost British past found on the shelves in the high street shop to reveal the shaky foundations of a heritage industry. Behind the humour are buried serious questions.

The author Stephen Clarke is an artist, writer, and lecturer based in the North West.

[1] David Ferry RE is Professor of Printmaking and Book Arts at the Cardiff School of Art and Design.
The Stately Aquariums of England (2011) was first shown at The National Print Gallery, London from 1st December to 13th December, 2011

[2] For more details including a tour of the house go to the National Trust website at http://virtualtours.nationaltrust.org.uk/calke/home.html