this is that and that is this 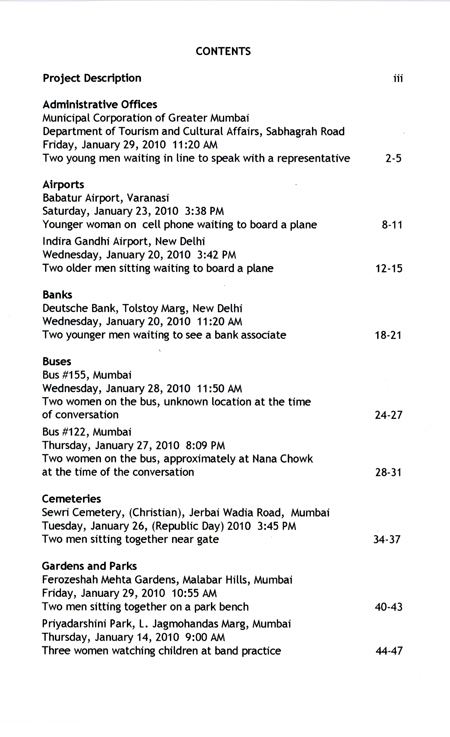 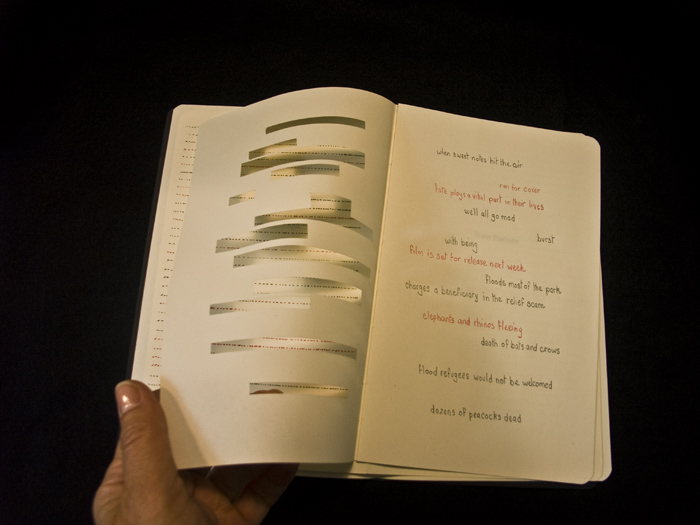 In January 2010 I was invited to be a guest at the home of a friend in India. My base was in Mumbai and from there I traveled to parts of Rajasthan and Uttar Pradesh.

this is that and that is this, consists of conversations transcribed into drawings. In each case the length of the drawing is an indication of my presence and not necessarily a depiction of an entire interaction between speakers. Individuals are represented by differently colored lines made up of dots, the duration of their utterance determining the length of that line. A single drawing is distributed between four pages. On page one the viewer is presented with lines indicating the author/observer as present, but outside the conversation. Containing cuts the central pages produce variations in signification as they are turned from right to left, or left to right. On page four words spoken in English appear as such, in sequence, floating without context.

Chapters are organized spatially and temporally in order to situate people in relation to the practices of their everyday lives and, at the same time, to reflexively position myself as an author/observer outside of these practices. I have also limited attributing to persons more than gender and an approximation of age, as, in most cases, this is all I know about the subjects of this project. Age as a descriptive category is represented in the following way: younger (twenties-thirties), middle-aged (forties-fifties), and older (sixties-eighties). It should also be noted that not all of the conversations I witnessed appear in this book.

In this is that and that is this, Susan Jahoda, an English artist living in NYC, follows in the footsteps of her countrywomen; she travels to India, and then represents it. But what is this India? We can situate Jahoda’s project in the long history of landscape aesthetics. Landscape brings in not only painting, but also travel literature, fiction, photojournalism, etc., and it is a medium—alongside its subcategories of the picturesque and the colonial sublime, as well as the presence of the omniscient gaze—through which empire was represented, especially during the eighteenth and nineteenth centuries.[4] While many of the genres of landscape aesthetics lost prominence in the twentieth century, photojournalism became, and continues to be, powerful. One can argue that photojournalism today is the handmaiden not for the imperial project, but a globalization that still allows for the overcoming of the other. this is that and that is this depicts Jahoda’s travels in India, her encounters with people and situations. Unlike landscape aesthetics there is no evocation of the picturesque and no all-knowing subject; unlike photojournalism, her project refuses to engage in narratives of documentation and truth, rather she does everything to resist them.

Jahoda has always been a trickster figure around her use of photography and in this project it is no different. Through the form of the artist’s book, Jahoda plays with the ideas of fiction and truth, photography and language. In musing about the two mediums, Roland Barthes writes: “It is the misfortune (but also perhaps the voluptuous pleasure) of language not to be able to authenticate itself. The noeme of language is perhaps this impotence, or, to put it positively: language is, by nature, fictional; the attempt to render language unfictional requires an enormous apparatus of measurements: we convoke logic, or, lacking that, sworn oath; but the Photograph is indifferent to all intermediaries: it does not invent; it is authentication itself...”[5] Whether or not Barthes is playing with his reader, Jahoda delightfully embraces language as being fictional and not surprisingly casts doubt on this notion of authenticity in photography. She does this by engaging in the forbidden, the unacceptable: she eavesdrops. She knows she should not be “documenting” these conversations, and she wants to make it obvious, wants her audience to realize this fact: her presence is ethically ambiguous. In photojournalism, we often forget, or want to forget that the photographer should perhaps not be there, has not been allowed in, invited; rather, he is trespassing a visual eavesdropping. But the ironic thing is that often this eavesdropping through its translation as photojournalism and stamped with approval by the Associated Press or Magnum Photos, is understood as documenting a truth, authenticating an event and becomes the harbinger of the ethical.

Jahoda inhabits a space of not-knowing, and keeps her audience in this same space; she wants us to realize how far removed we are from understanding what actually is going on. The endless dots on the pages transcribe the Indian languages that Jahoda hears and does not understand. But the colonial legacy of the erstwhile jewel in the crown seeps into the everyday of India in myriad ways, not least language, with Hinglish or other seamless blends of Indian language and English. The English Jahoda understands and records. Ironically, English becomes the site of confusion for Jahoda, for us. We as viewers/readers start to make assumptions about what these conversations are about, but then we have to stop ourselves as we realize that we cannot really know.