Note : Idle thoughts (from a desultory conversation on facebook / between Matthew Collings and Phil King regarding Antonin Artaud's drawings and Basquiat's cultivated style. 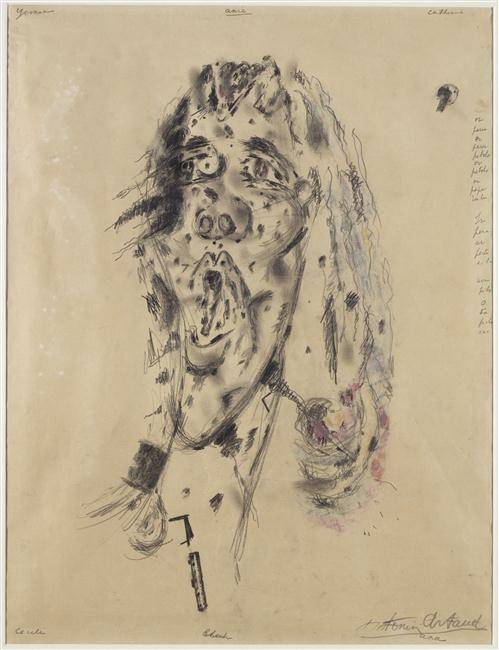 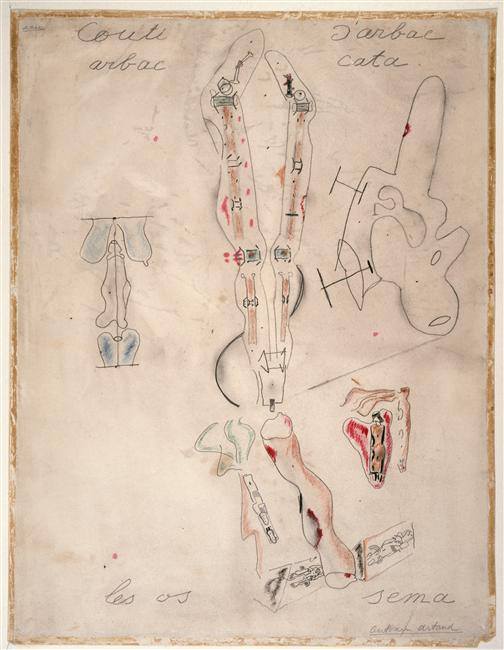 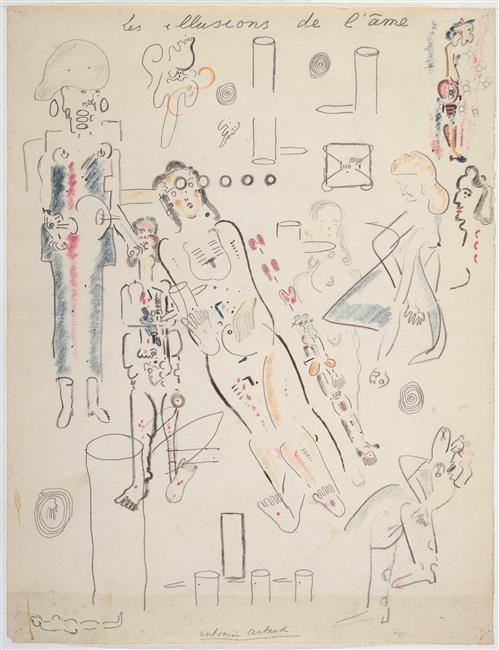 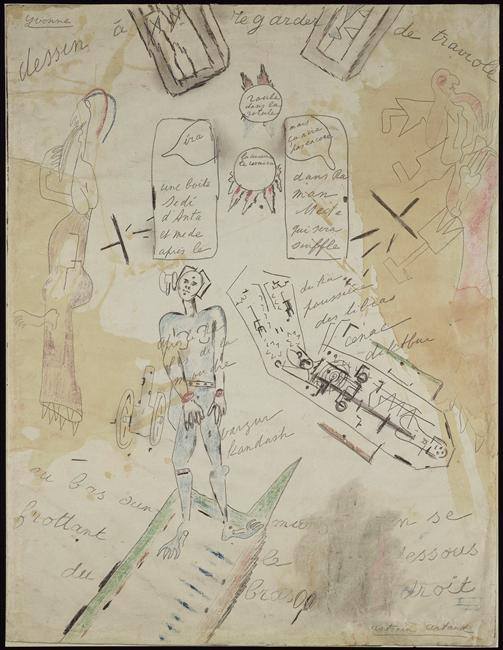 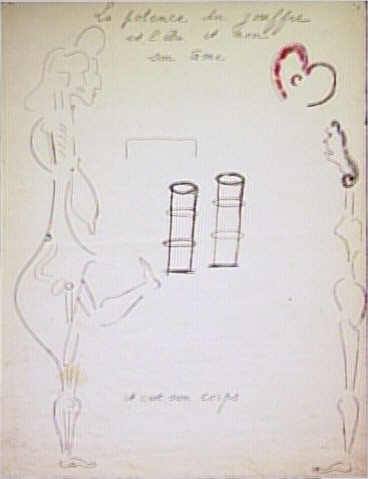 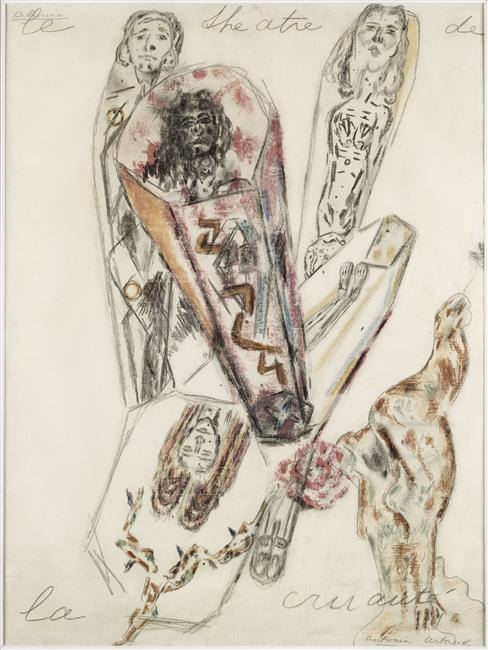 Artaud has multiple qualities -yet is his 'untrained' art identifiable as an 'outsider' measured from seeking a category for neurological/semiological organisations [types] of visual representations vis-a-vis mental states or conditions? Mathew Collings points out how visual art untrained is always identifiable 'immediately' - but also as such it might also display signs of a generic expression, not from our own era, something Collings remarks like a 'period' style, despite the multiplicity of styles in any given period. What styles exactly are picked up here, he asks? Can we compare 'style' if we cannot define what it means outside these frameworks, of an instinctive rather than rational use of signs, or from a primary sense of childlike representations of desire to identify, to Basquiat's knowing primitive ironies that compose and recompose the post-colonial by mirroring and over-identifying? Is it a task worth committing time to unravel the contradictions? Collings adjusts his viewpoints which cross-over and blur the categories of known and unknown enough to prevent the desire to any further debate if solely around comparisons of the 'quality' of either artist in competing styles, and whether life 'style' itself is a carrier of kinds of submerged reactionary behaviours disguised in consensus virtue. We can see the problem in how non-differentiation evolves from the bundling of all styles into one conspiratorial threat and accusation, (degenerate, hedonist, mad, crazy etc) only reversed in politically correct innocence in a closet scapegoating, or to initiate fear-mongering, something Artaud and Basquiat would have fiercely resisted, in protecting their radical difference by an equitably extreme behaviour.
Phil King replies that handwriting styles might be interesting to research in that case, if one is defining the 'watermark' of an era by its written signatures bled upon a torn surface. He notes that there is a sense of a particular epoch to Artaud's handwriting, which joins the planes of 'drawn' to 'written' to a stylistic uniformity, 'dated'. Cy Twombly seemed to exploit that sense of datedness in his pencil scrawls, disarticulated in the left-handedness, or gauche, as a resistance to conform to the fix of duration already fading, as some kind of autobiographic, or authored authenticity, rather the fiction of being already a weak trace of any potential to tragic sense of theatre. Basquiat and Artaud are immediate, urgent, and brutal in contrast to Twombly's eternal flame near to extinguishing the fragility of his flickering line. Collings replies, Artaud is actually much more marked in his timid figural striving for another less acceptable form of aesthetic weakness, colouring in his figures without clear delineation, like the amateur's inability or the madman who wills indeterminate form, yet withdrawing in the dark, certain of the unconscious act. Pierre Klossowski, Collings reminds us, also tests rational certainty with the desire for an awkward sexual uncertainty. This is good manners dressing up as the Other, not pervesion as such, in either case. A kind of confidence that Artaud possess is incubated in unforced naivety and failure. Something that mainstream art, since formal and rational in the daylight of criticism, is not able not convince, since a success in making visible. Simon Bill argues in the comments further that the obvious commitment of time and care in Artaud – the hatching and so on – is not a sign of timidity. First, that amount of time spent on doing things is a sign of commitment, in the veracity of the so-called madness, and its incarceration, at the same time is convincing since it is a product of an extreme exhaustion, and discomfited wearing the ill-fitting mask of reality. Artaud is persistently radical, and unpalatable therefore.
Basquiat 's careful mannerism, Phil King reminds us, sets a stage for affirming sanity, actuality, his reality is felt in the surfaces and hand-made, so immediate, yet historically loaded with references to politics in its repetitions. "All kings eventually lose their heads' he writes on a canvas. Hand-written and sincere, yet insincerely formal about such camp inevitability, spoken in the same breath the truths of both William Shakespeare and James Baldwin. Alertness is a good way to put it, says King, as a kind of palpable empathy with the tragic sense in a form of its public, accessible address, in the diagrammatic monologue of an actor. His playing and improvising with an actual urban political mess is inauthentic in that his situation is, yet reflects his brief time caught in the fever of celebrity and exploitation to betray his instincts in a certain expression of unwillingness and despair in the image.

Artaud's drawings seem to be entirely authentic, if we acknowledge the pitfalls in describing them as 'mad': that they do not induce the normalised sense of boredom, since presenting exceptions to the rational aesthetic and routine of daily perception. Basquiat has no discourse to support the work, from 81/82 when he was at his height in producing works of distinction, if we again assume that a decline set in in terms of the intensity of the work after that, with also writing occupying more and more space (xeroxed pages collaged in) . This is a trajectory the market for Basquiat really controls, Collings writes, or invented, or it could be a true measure of the artist's failing, if unusually the market has measured correctly about the quality. But since many factors are conditioning the value of the work, its a false picture of marked failure and paradox as an idea of truth and authenticity, that artists generally 'decline' over longer or shorter periods, to fight off the inevitable entropy. One works harder, or reaches a moment of illumination through that intensity of continuous practice. These observations are desultory, as there seems to be only differences in measure and patterns of quality that result from idiopathic personality. Illumination can arrive suddenly, without work or 'practice', a dirty word. Do the trajectories and rhythms in Artaud's drawings and his 'theatre of cruelty' depend on the fine line between failing 'failure' which is at core an aesthetic, and missing the beat in an act of transformation, that collapses all separation, between surface and figure, or internally between, to and from the 'self' and 'non-self'? Phil King writes, it is not so much a question of a general falling away in quality, but of 'balance' - in Basquiat's case that is between his knowing mannerism as a kind of organising force, and his assemblage approach to painting, the scrawl disrupting, and fragmenting compositional norms, enacted / repeated as a method, so ends becoming tired of itself, over-trained, or as the actor's training to appear mad, fake, yet overcoming intention in the ensuing, tragic sense of indifference to the will. King considers Artaud's handwriting in memory of his own training in French handwriting, the special training paper etc. There is a resistance to the rigour of the trained thinking/writing as an exercise in ideological normalising which the drawing marks as an attempt to escape that way of training the line into civilised loops of simulation of socially acceptable behaviour and in consensus belief of the herd. Artaud will break, tear and ruin to evade the discipline of the 'self' to orders by pure destruction, in embracing the injunction, the Other's voice, as King writes of the pencil point breaking the signature... a ploy...a kind of teacher approved care that he wilfully disappoints.