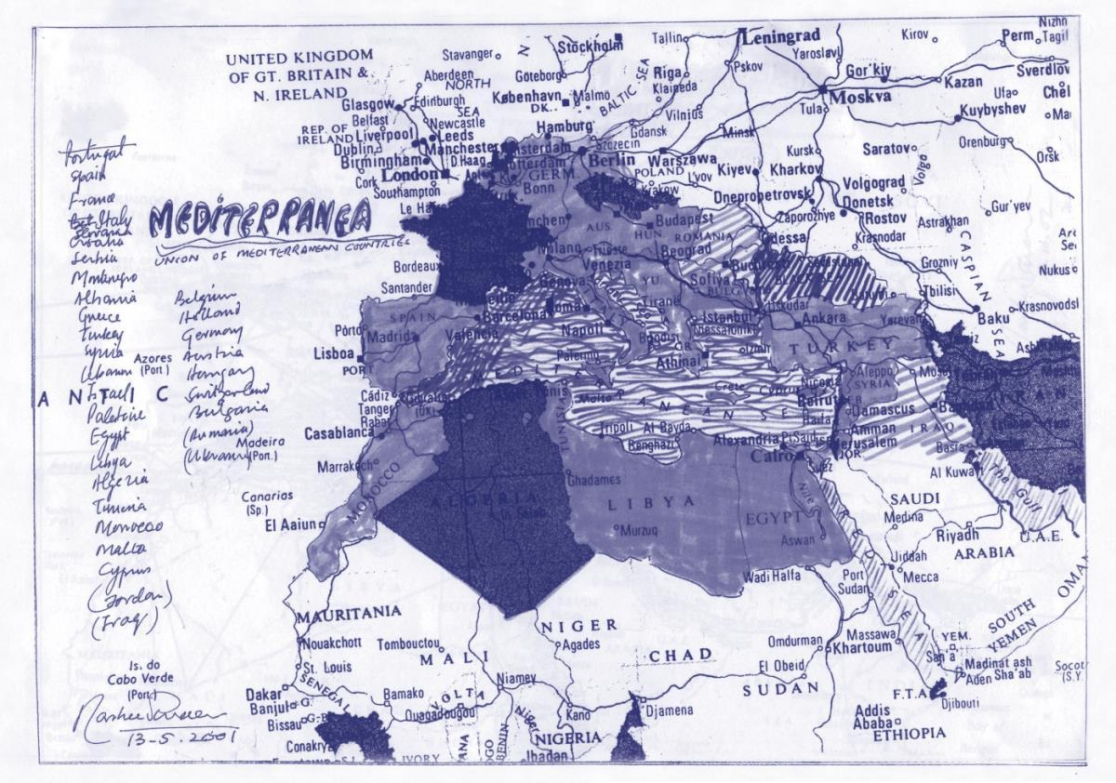 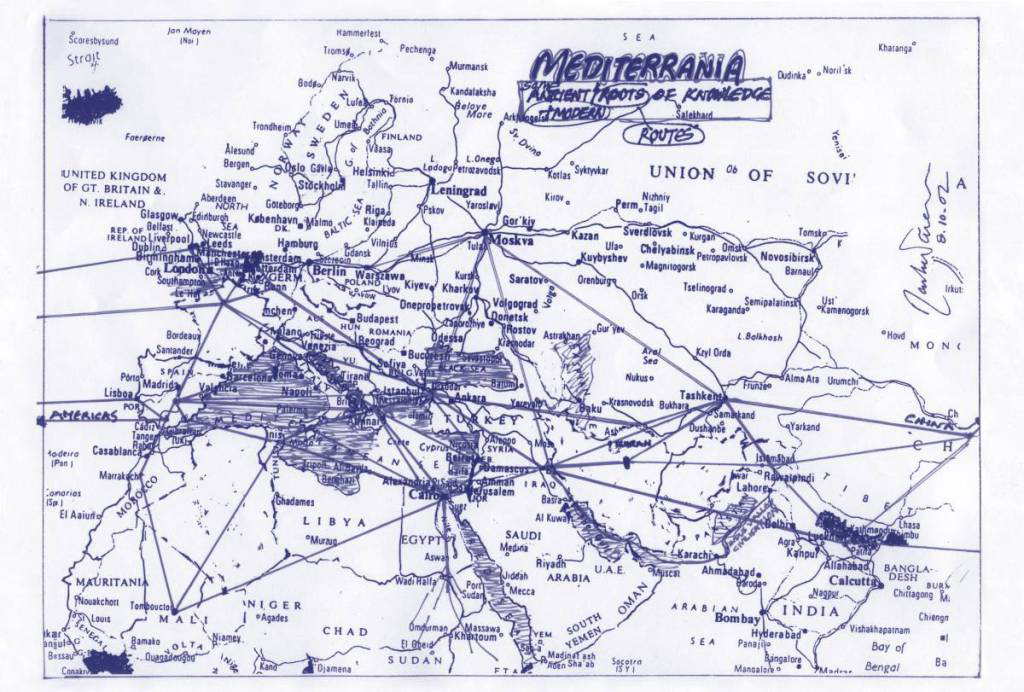 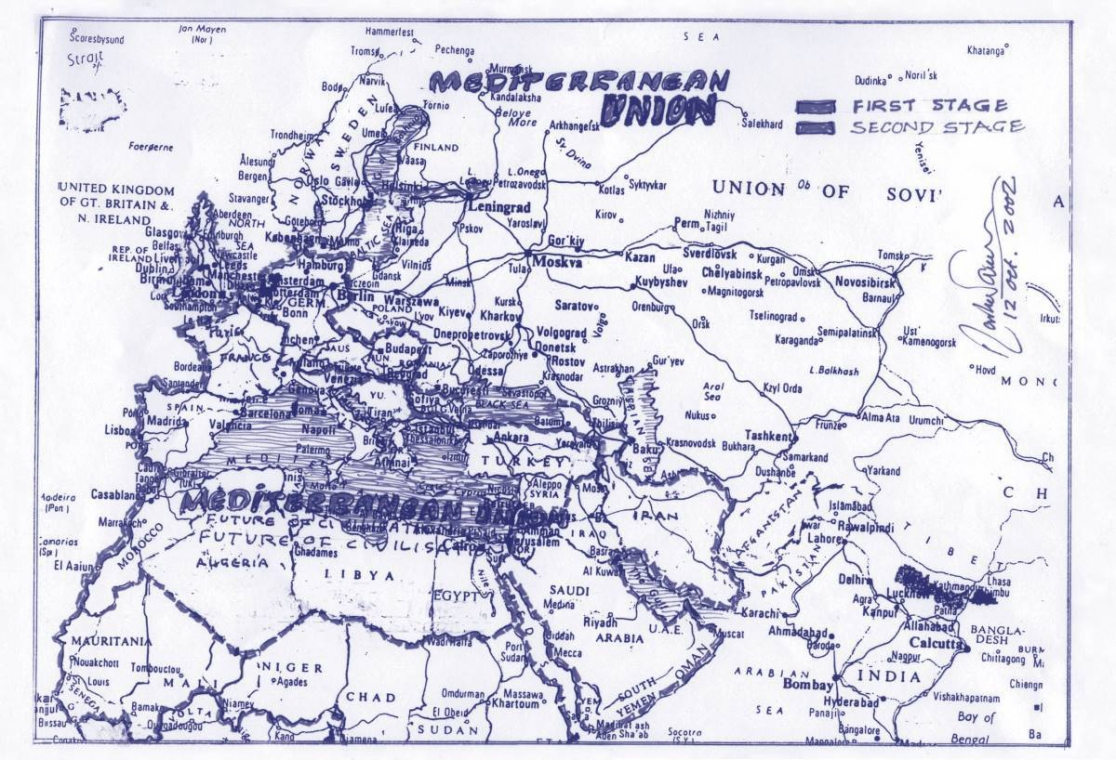 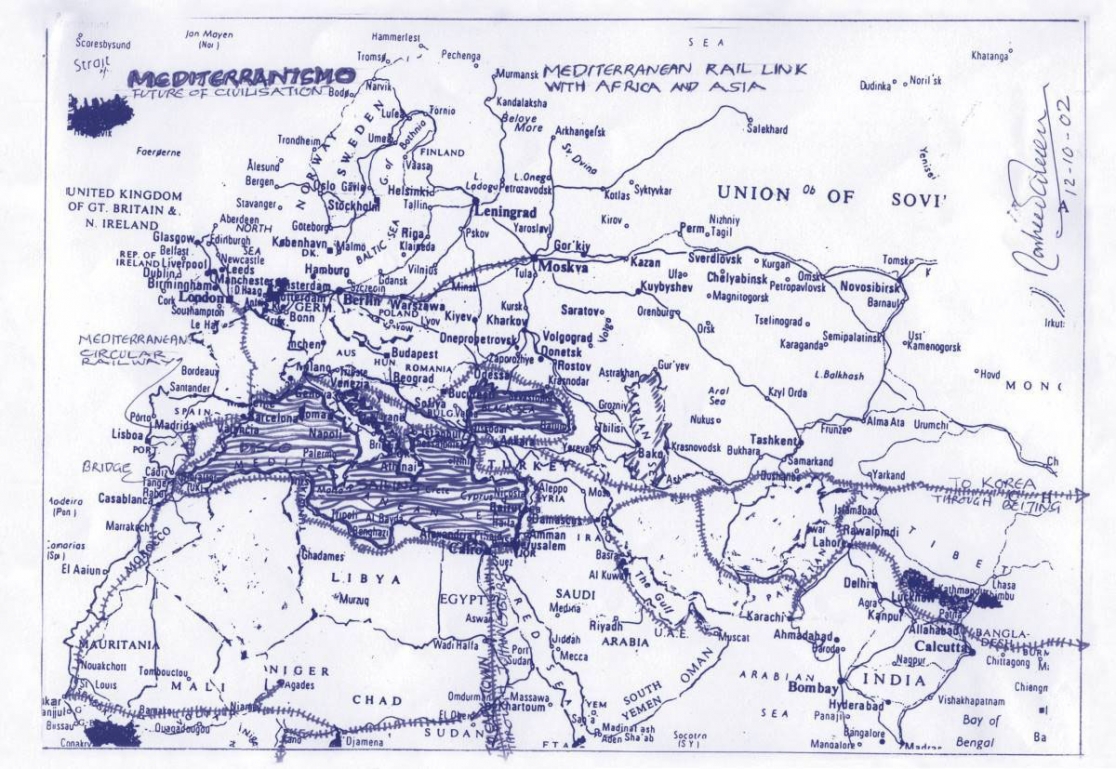 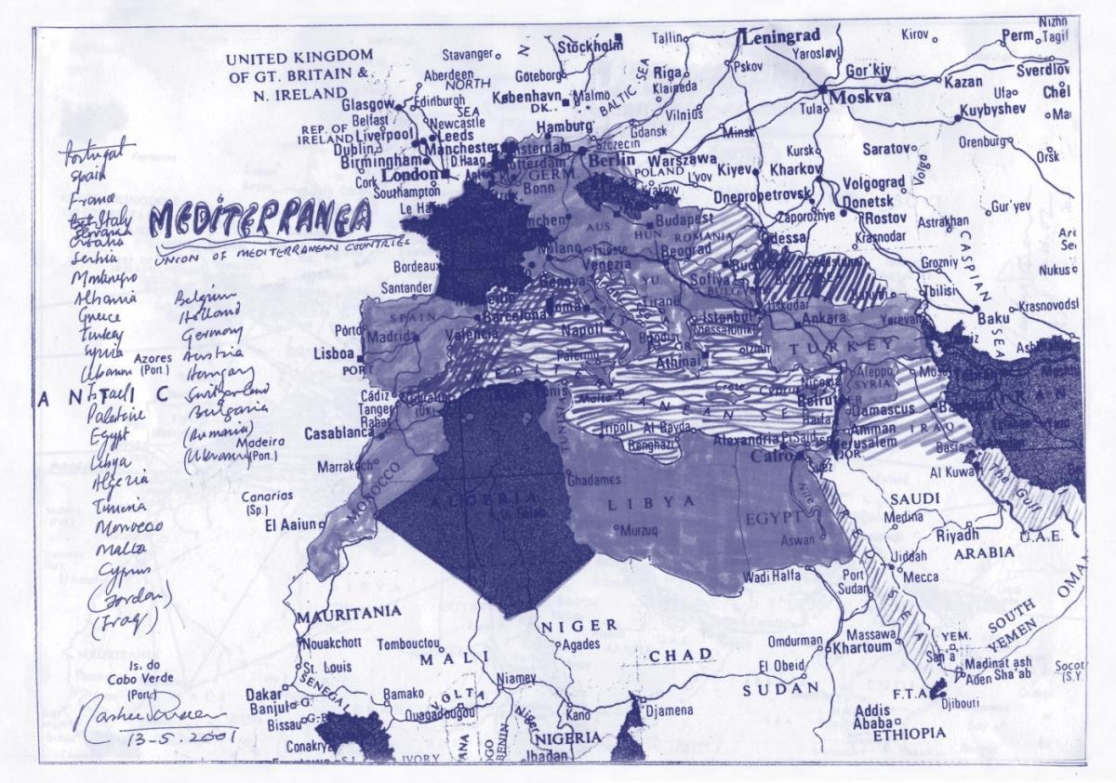 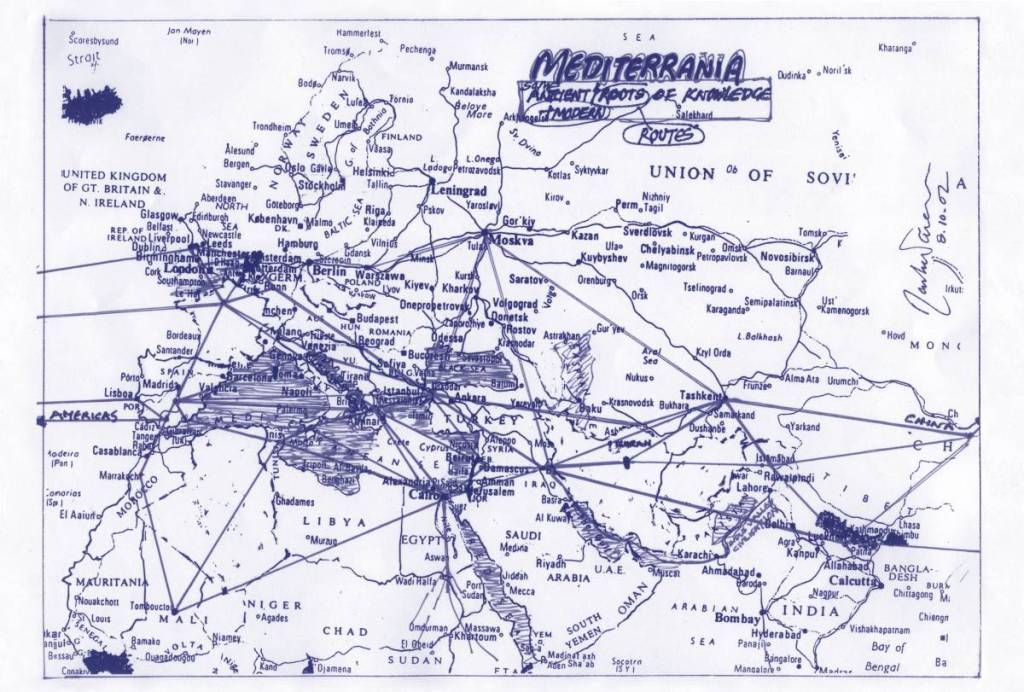 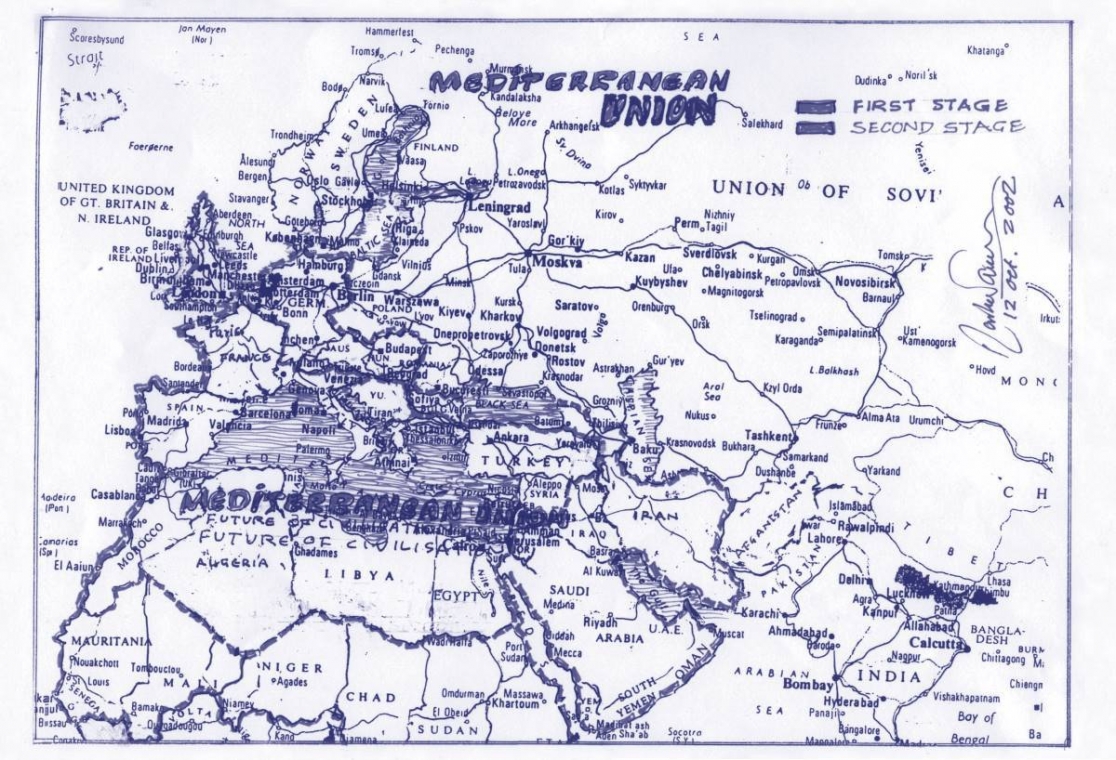 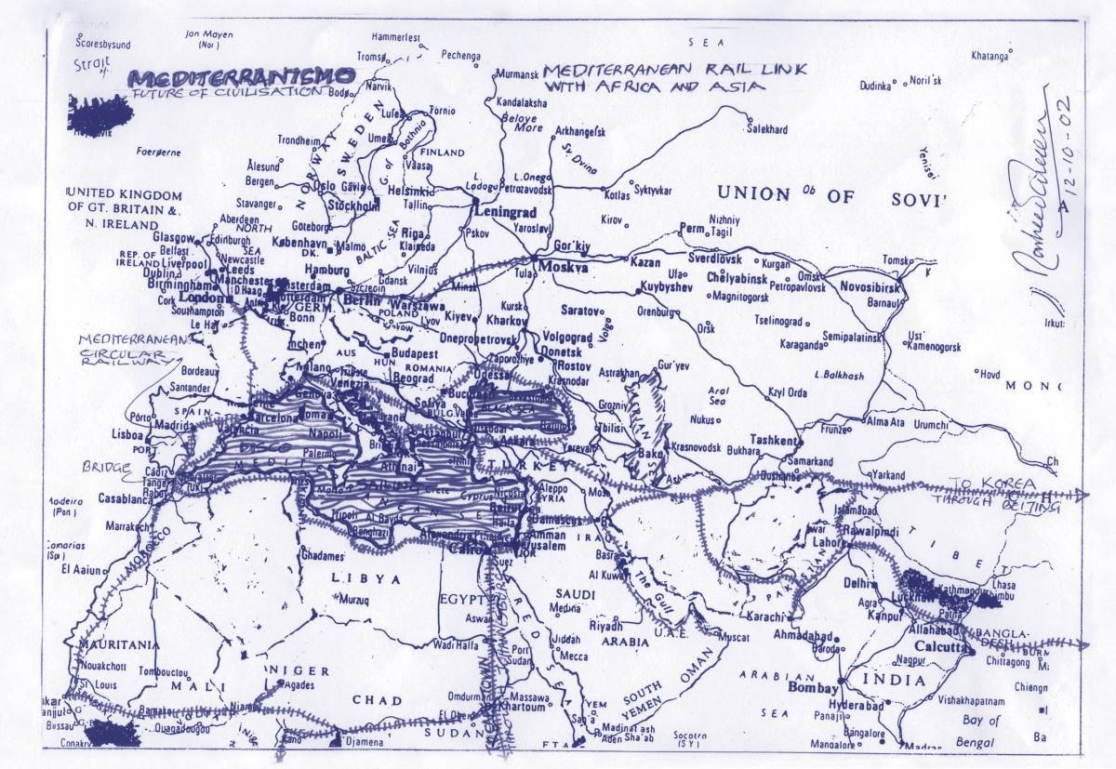 Mediterranean Manifesto: The Future of Civilisation
The Mediterranean as a great means of communication, Interaction and exchange of ideas between three continents [Asia, Africa and Europe].
Once the Mediterranean becomes a great centre of communication, of exchange of ideas, between the West and the East, between the North and the South, this can generate economic activity that would rejuvenate the whole area around the Mediterranean north and south, east and west, creating a civilization based on human equality. In Africa, this development can and should extend not only to Saharan countries (Senegal, Mauritania, Chad, Mali, Niger, Sudan) but also to sub-Saharan Africa up to its southern tip.
In Asia it will create links, through Syria, between Turkey, Israel/Palestine (I envisage a federation between them) – all Mediterranean countries – with not only the oil producing countries of the Middle-East but also beyond, to Japan and China. In other words, the re-activation and re-opening of the old silk route, through a network of railways. In the West, new shipping lines should be established which would carry not only cargo but also passengers – between north-west countries of Africa (Senegal, Guinea, and Mauritania) and in particular Central and South America (Venezuela, Guyana, Brazil, Mexico, etc). The harbours of north-west Africa are then connected to the Mediterranean countries of Algeria, Tunisia, Libya, Egypt, Morocco, through the rail network passing through Mali, Chad, Niger, Sudan, etc. This rail network is also connected to another rail network extending up to South Africa. Northern and Southern countries are linked with an extensive shipping lines.

Karachi, 14th March 2001
[Note: Exactly three years after I thought of and conceived the idea of re-opening the old Silk Road, by rail network, China announced (The Guardian, 13 March 2004) that it wanted to construct a rail link which will connect it with Europe].